According to the Findlay family history, Donaldson – a mere piano
teacher - ‘ran off’ with Mrs Findlay’s youngest daughter, known as
‘The Flighty Dorothea’, and married her in the teeth of family
opposition.
Described by the Findlays as ‘a cur and a scoundrel’, Donaldson
spent over 40 fruitless years suing them for Dorothea’s patrimony.

Donaldson is known to have published only one composition, his Sonata for the Piano Forte, of which there is one original copy in the British Library. Inja Davidović’s recording of this ambitious piece on a modern Steinway Grand is included on the CD at the back of this book; this is the only publicly available recording of this work and is not available separately from the book.
Donaldson went on to win the Chair of Music at Edinburgh University, where he pioneered the teaching of acoustics and established the John Donaldson Collection of Historical Musical Instruments  in what is thought to be the oldest museum of its kind in the world. 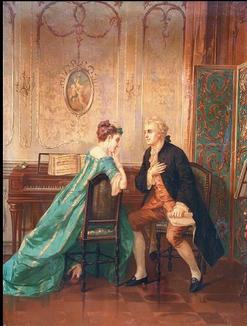 John Donaldson, son of a well-established organ builder of the same name, started as a private piano teacher in Glasgow and traded as a Broadwood agent through his shop in Glassford Street. Donaldson adopted Logier’s controversial ‘chiroplast’  or ‘hand-director’ mechanism for group piano teaching.