In March 1942, when the Japanese invaded Burma, Flotilla vessels were used to evacuate British and Indian forces as far northwards as possible; the rest of the fleet was scuttled to prevent the vessels falling into Japanese hands. The glory days of the magnificent Flotilla were over.
After Burmese independence in 1948, the Flotilla was nationalized and it still operates on the Irrawaddy, with the original Flotilla livery, but never matching its pre-war scale.

Boats of the Flotilla Company © The Kipling Society.

All the vessels for the Flotilla – flat-bottomed steamers and ‘flats’ which were towed or lashed alongside them – were pre-fabricated by Dennys and other Clydeside yards in knock-down form, shipped out to Burma and reassembled in yards at Rangoon. More than 600 vessels were built for the Flotilla over its 90 years. 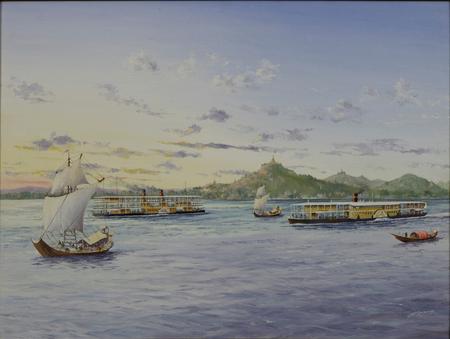 ​The main trade was in rice and teak. Trees were felled and floated down-river to sawmills at Moulmein for export worldwide. The flotilla also provided vital transport for the military: in 1878, for example, 10,000 soldiers, 7,000 camp followers, 500 mules and two mountain batteries of artillery were taken upriver to deliver an ultimatum to King Thebaw of Upper Burma who had refused to concede to several unconditional proposals which directly threatened his independence. Following a short engagement with Burmese forces, Mandalay was easily taken and the last King of Burma and his Queen were taken by steamer to Rangoon and thence to exile.

​The Irrawaddy Flotilla
The Irrawaddy Flotilla Company, immortalized by Rudyard Kipling in ‘The Road to Mandalay where the old flotilla lay’, operated in Burma from 1865 until the late 1940s. It was originally established as a partnership between East Indiaman TD Findlay (Mrs Findlay’s grandson), Dumbarton shipbuilder Peter Denny (the author’s great-grandfather) and the Glasgow ship-owners Patrick Henderson & Company, known in their day as ‘Paddy Henderson’. It had taken over a small government-owned flotilla which needed major private investment to build a fleet that could trade the 1000-mile length of the Irrawaddy from Rangoon to Bhamo, close to the frontier with China.