'I have been reading the book and listening to the accompanying CD with enormous pleasure and admiration; you tell the story with wonderful vividness, precision of detail and lightness of touch, and the well-chosen illustrations are delightful and instructive.’

‘What a wonderful book...and what a way into a fascinating family history, comparable to Edmund de Waal’s ‘Hare with Amber Eyes’, linking people across time and space.’

‘What a pleasure it was to receive your book...a beautiful volume.'

'It's the best recording I have heard of a square piano.'

'Beautiful and fascinating! Do tell Inja Davidović how much her performance is appreciated - her playing is terrific and takes [Donaldson's Sonata] to a new level. She has shown and played with respect and true musicality – especially the slow movement which she performs with wonderful dignity and a real sense of its depth – almost Beethovenish. The [Donaldson] recording and, unusually for a Steinway, the piano sound, are perfect for the piece: nothing too brash, depth in the tone and drama too. And how the old Broadwood loves Bach! – and of course...Field is incomparably lovely on such an instrument.'

'It's a wonderful book! Every element seems perfect - the research, the illustrations, the format of the book and, of course, the story with all its amazing coincidences.'

Michael Hannon, who was born in Belfast, read Classics at Trinity College Dublin.  During his career in academic librarianship, he held posts at Queen’s University Belfast, and Leicester and Liverpool Universities. In 1985 he was appointed University Librarian at Sheffield University, where he was also co-Director of the British Academy/Leverhulme Trust Hartlib Papers Project and Secretary to the Humanities Research Institute, which won the University’s first Queen’s Anniversary Prize for Higher & Further Education. He served on the Board and as Treasurer of the UK Consortium of University Research Libraries and chaired National Advisory Committees on Manuscripts and Special Collections. He led library development consultancies for the British Council in Algeria, Egypt, Greece, Indonesia and Nigeria.

In retirement, while researching the history of the square piano, he developed a special interest in early keyboard instruments, as well as in family history.  In 2007 he completed a replica of a 1715 Brackley & Keene spinet, which has been used in concert.  He has recently refurbished a Morley four-octave clavichord which he acquired in Aldham, near Colchester, while researching Findlay family connections with its Parish Church. Other musical interests include singing bass with the Sheffield-based Abbeydale Singers. As a member of Sheffield Cathedral’s Fabric Advisory Committee he has a special interest in the commissioning of a new organ for the Cathedral.

Michael Hannon and his wife live in Sheffield; they have a son, two daughters and seven grandchildren. 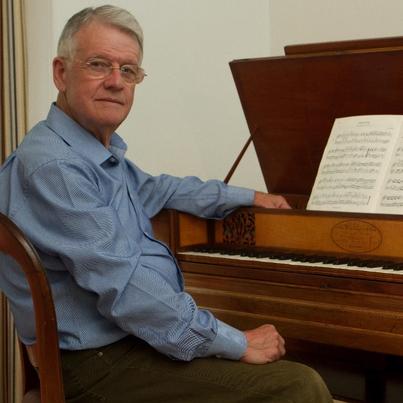